Philosophy
As a human being becomes more structurally balanced and upright, and all the ropes/muscles of the 'human tent', just as in the image above, approach relative balance versus each other and gravity, (see also Structural Integration) he or she will also experience more emotional, psychological and spiritual 'uprightness'.

The meditation on, what Dr. Rolf called 'the Line', is an opportunity for working on one of humanity's most protracted riddles:

How can we have our feet firmly rooted in material reality, while at the same time keeping our eyes fixed on the far stars?

The concept of 'The Line' bridges the gap between purely anatomical considerations and philosophical or metaphysical ideas, as expressed for instance in Zen Buddhism or Hatha Yoga.

Johann Wolfgang von Goethe hat, has in his own way, put this Koan into a poem, and the Buddha,in this fundamental text, has pointed out a path :

With the gods
No man should ever
Seek to compare
If he rises upward there to touch
The stars with his crown
Nowhere can rest
His uncertain feet
And storm clouds and tempest
Will make sport of him.

If he stand firm
With sturdy robustness
On the well supported
Permanent earth-sphere,
He will fall short
So much as to vie
In vain with the oak
Or with the vine.


from 'Limitations of Man'
by Johann Wolfgang von Goethe
THE MOTTO

Do not believe in anything
simply because you have heard it.

Do not believe in anything
simply because it is spoken and rumored by many.

Do not believe in anything
simply because it is found written in your religious books.

Do not believe in anything
merely on the authority of your teachers and elders.

Do not believe in traditions
simply because they have been handed down for many generations.

But after observation and analysis,
when you find that anything agrees with reason
and is conducive to the good
and benefit of one and all,
then accept it and live up to it. 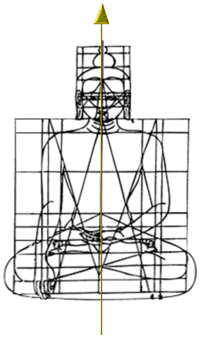